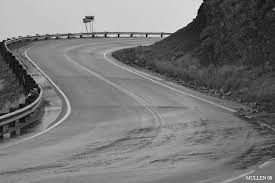 A bend doesn’t mean the end … Just make the curve.

unless you fail to make the curve!

Ever been thrown a curve? Of course you have. We all have had the experience. You are expecting one thing and get something else. A promise made to you is broken. An eagerly anticipated event is abruptly cancelled. The weatherman promises sunshine and unexpected rain ruins your plans.

Life was moving nicely along a straight line for Job in the Bible when he encountered an unexpected and devastating bend in the road of his life. The prophet Elijah was hiding out next to a creek. He’s been on mission for God and has made the king angry. Now he is drinking from that creek when the entire nation is thirsty (I Kings 17) and suddenly he’s thrown a curve when the brook dries up.

Joseph was a favored son who had received dreams of an amazing future. (Genesis 37) This young man’s life was moving along splendidly when his road hit a wicked switchback!

Saul was traveling a road straight into Jewish prominence. That road led him toward Damascus to take prisoners of that city’s Christians where on his way he encountered a sweeping bend in his road that turned his life and its mission on a one eighty!

We forget sometimes that God uses curves for his own purposes in our lives. A straight line may be the fastest route between two points, but God seldom leads us on a highway with no bends. Why? Because they often help fulfill his plan for us.

Job’s bend brought him new insights about his Creator. “I had heard of You [only] by the hearing of the ear, But now my [spiritual] eye sees You.” Job 42:5 Amplified Bible Elijah’s bend took him out of the creek bed and into the home of a widow whose son Elijah raises from the dead. And from there God’s ‘bends of preparation’ led him to confront the false prophets on the summit of Mount Carmel where the entire nation is introduced anew to God’s power.

This week don’t see the upcoming bend as an end or as a danger or as a useless detour to your plans. Don’t fight God’s routing. He’s not just getting you somewhere, but building, teaching and maturing you on your journey. Trust Him!

“Accept the way God does things, for who can straighten what he has made crooked?”